Sorry I haven’t written in a few weeks, I was so busy between work and craft show preparations.

The Scottsville Fall Artisans Festival was yesterday. It was the big craft show I’ve spent every spare moment of my time preparing for for the last 3 months.

Set up began at 9 AM, we were supposed to open at 11 but we had people start trickling in around 10! I hadn’t even gotten any of my stuff put out at that time! I made my first sale around 10:30.

All set up and ready to go

It was the first time Scottsville had ever hosted a festival like that and I’m glad I got to participate, there was a huge turnout! I’d say it was quite successful, at least for myself! I was the only jewelry booth in the whole show and I was front and center in the middle of the pavilion, my booth was the first one people walked past as soon as they entered the show! Talk about prime real estate!

For the most part we were busy clear through until break down time. Even if people weren’t buying, they were still looking. I had people stop by two and three times before they actually bought something!

My little top hat fascinators were pretty popular, as were my cocktail rings and the button earrings I had made.

My fiance helped me handle the money and he got to get his tech-nerd on with the Paypal Here app and card swiper. We did a lot of cash business and quite a bit of card transactions too. I think people were more willing to buy when they realized I could take card because I had several people who had made cash purchases come back and make even bigger purchases on their credit cards!

hair fascinators, I sold half of them 😀

The show was supposed to wrap up around 5 PM but we still had people coming in to shop and we ended up keeping open until almost six and it was after 7 before we finished breaking down, cleaning up and returning borrowed supplies.

I met some lovely people yesterday too. Quite a few members of my fiancé’s church and family came by to shop and to meet me and a few of them purchased stuff. I saw friends from high school that I haven’t seen in years, many of whom are married with kids now. I even saw some of the ladies from the pool where I work and even my 7th grade art teacher stopped by!

Overall it was a good day. The weather was perfect. The people were really nice and business was brisk. I will definitely participate should the festival be offered again!

Leave a comment | posted in Artisan Crafts, Business As Usual

Had a rather pleasant surprise today. I got a phone call this afternoon. At first, I wasn’t going to answer it, since generally I don’t answer calls from numbers I don’t know but since it was a local number, I went ahead and answered it.

On the other end of the phone call, was a lady who’d gotten my card from a friend. She wanted to know if I had time later this week that I could meet with her. She had some old jewelry and wanted me to look at them, see if I couldn’t turn it into something new.

I told her I’d be more than happy to take a look so on Thursday I’ll be going to do my first consultation for a commission that’s NOT a friend or family member!

Sorry it’s been like a week since I last posted. I know you would’ve expected me to have written a post as soon as I got home from the flea market last weekend but my internet’s been down and I haven’t been able to do so.

I was at least happy that I paid for the booth ($15). After that, I had a $70 profit which wasn’t bad. My goal was $100 so I got close and since this was my first time EVER selling jewelry to the general public, I can’t complain. 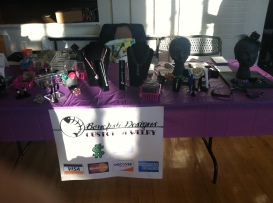 my booth, all set up

The local news came out to cover the event too. They’ve shot footage of me painting faces before but it’s always my ear, or my hand that gets on TV. I told my fiance jokingly that maybe my toes would get on TV.

Much to my surprise though, the last 10 seconds of the video that they aired on the news was a full on shot of me and all my jewelry!  Yay! Free advertising!

Flea Market on the Evening News

Leave a comment | posted in Artisan Crafts, Business As Usual

We are five days away from my craft show debut (holy shit!). I’m not freaking out yet but there’s still so much to do!

The festival is going to be on Sunday, September 29th (my bday is the 27th!) I’m so excited! We were supposed to know by August 9th. When I hadn’t heard anything I assumed I didn’t get in but they had sent me an email and it went to my spam! I’m so glad I thought to check it! I’m crying, I’m so excited!

Gives Me a Purpose

It’s been a few days since I posted last. I’ve been working non-stop trying to prepare for this flea market on the 24th.

I’ve got 18 days to go and I’m starting to feel it. It’s probably the best and the worst thing for me to deal with. It’s been a long time since I’ve had a definitive goal, an objective.

I’m feeling slightly manic but (for the moment) it’s a good energy. Every waking moment for the most part, if I’m not at work, is devoted to getting this stuff done. I need to do this, as much for myself as for the potential for income.

I think I work well under pressure, and having a deadline has really given me the drive to get my stuff done and a goal to obtain, not to mention the creativity I’m finding it fosters. So many cool ideas and so little time! 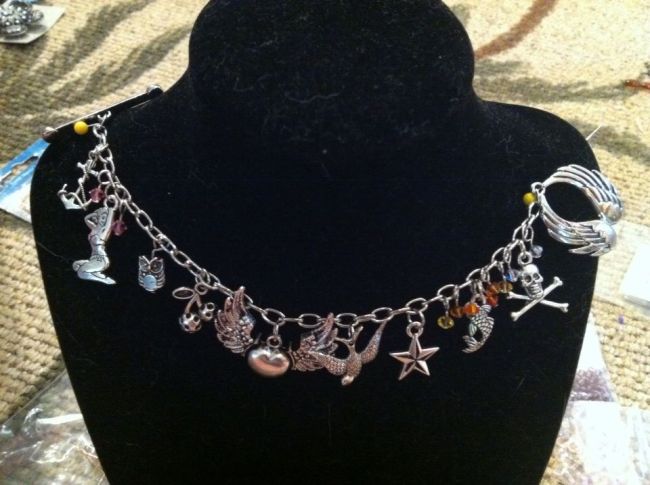 My promotional stuff for the Artisan Flea Market came in! I got postcards, label stickers, and a free pen (which I will promptly end up losing XD) 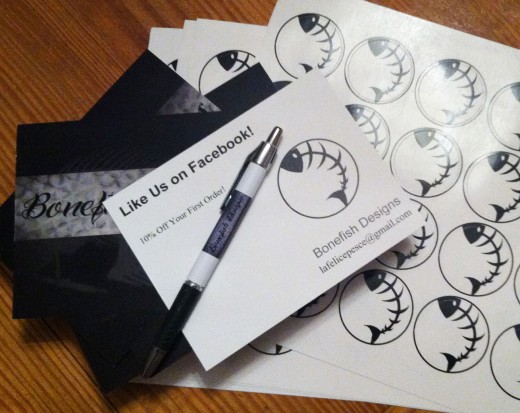 My plan is to hand out the postcards at the flea market. I got the stickers to use to close the paper bags I bought, a lot prettier than just balling them up. My fiance bought that paypal card swipe thing for me so I can take credit and debit cards too. I’m so excited about how every thing’s coming together, I just wish I could afford to take time off from work to focus on getting ready for the flea market but bills won’t wait

all packaged up, ready to sell

I spent ALLLLLLLLLLLL weekend preparing for the artisan flea market. I’m quite proud of myself, I’ve got 25 completed pieces packaged, priced, and ready to go but good lord my fingers are feeling it! My poor fingertips are actually bleeding a little bit from the head pins biting into them.

My living room is a disaster too, much to the irritation of my mother, haha. I’ve been sorting and consolidating my craft supplies as I’ve been going so there’s quite a mess on the floor at the moment but it’ll be a relief once I’ve got everything done for this flea market and I get myself ORGANIZED!

quite the productive weekend

I got a booth at the flea market at the end of this month! SO excited! First time I’ve been accepted into any sort of organized market to sell my stuff! I can’t wait! I don’t really know what sort of profit I’ll make but it’ll be nice to unload some of my jewelry and clear some space in my studio! And really, ANY extra income is most appreciated!

I find out this coming Wednesday, July 31st, whether I got accepted into an Autumn Artisan Festival too. Fingers crossed, I’m really hoping that these little gigs start working out for me. It’s something I’ve really wanted to get involved with for a really long time but this is the first time I’ve had the means and the opportunity to get involved in it.

My dream is to own my own full time business and every little opportunity to sell that comes my way, to market myself, get my work out there, is a huge step in the right direction.

The Belmont Festival was yesterday. There were a bunch of people that came out that had been at the Sunday Sundown event last weekend. I had quite a few people ask me if I had had more business cards made like I promised. I told them I had. I passed out about 20.

I painted ALL afternoon! At one point I had a line clear across the park! And even a thunderstorm didn’t break up the party! I was set up under a tree at a metal table and folding chair and it was pouring. There was frequent cloud to ground lightning and I was told to just deal with it, that it would move on! Talk about dedication (not really, what can I do when the people paying me to be there told me to stay put?). I would’ve liked to’ve been set up under the picnic pavilion but no such luck!

The news crews came out and shot video of the event and I ended up on the 11 o’clock news last night. Nothing special, they shot over my shoulder. I was like “woooooooo my ear and my paint brush made it on the evening news!” haha.

They’ve got a photo of me up on their website with the actual news story too:

I think I painted a bear on this kid’s cheek

It was still pretty cool to end up on the news, and for doing something that I love. We’ve got another event coming up in two weeks and I’m hoping the organizers will let me put up some of my personal art to showcase what I do when I’m not painting faces. I get a lot of compliments for my face painting but I cringe at some of the stuff I paint because it looks so blah and amateurish next to my big finished paintings.

I was also able to order the postcards I wanted, I used vistaprint to order my business cards and their “semi annual sale” happened to occur earlier this week and I was able to order 100 postcards for a pretty heavily discounted rate (yay coupons!). I’m hoping I’ll have them in time for the next event too.

Oh, next event, I really need to get one of those Off! bug repellant clips! I got eaten alive last night!

It all starts behind the scenes.

Create & Decorate—the blog
Outside The Lines

This WordPress.com site is the bee's knees

A Home For Science Fiction and Fact

where past meets future