This piece is another one of my rotational works in progress. I started it a while ago but haven’t really gotten it to a point where I’m ready to share it, until now. I really needed a break from “Morphine”, the fan was starting to drive me crazy, so I turned my attention to the post- Apocalyptic.

I’m calling this piece “Nirvana”. Not like the band. Nirvana like the Buddhist idea of transcendence. With this piece, juxtaposition (such a great word and even better magazine), played a huge part.

In Buddhism, Nirvana is a state of higher being, that can be obtained through devotion in life or after death, in which the body is freed from earthly suffering and human impulses, it more or less means to “just be”.

The lotus is a symbol of enlightenment, the flower grows out of the mud, figuratively where the soul is mired in human sin, emerging from the water- life lessons learned, mistakes made, to blossom- achieving enlightenment, understanding, and tolerance. . .

Throw into this mix the post-apocalyptic biomechanical/cyborg female. . . not quite human but still existing, albeit in a world that has apparently been poisoned (the gas mask), yet she sits in quiet repose. . . Is she oblivious? Accepting? Resigned to this destroyed world?

The skull in her lap is a testament to humans as they once existed. . . do they still exist? Was she responsible for their destruction? Is she seeking atonement for her sins? We can’t see her face behind the gas mask so this provokes the thought, between the gas mask and the mechanical parts, was she once the human whose head now rests in her lap?

The juxtaposition also poses the question and provokes the thought. . . is such imagery blasphemy? Does it mock the Buddha, in whose meditative position she resides? Has she found solace in some ancient, long forgotten teaching?

Ganesh sitting on a lotus

The gas mask itself is reminiscent of the Hindu god, Ganesh. Does she mock him? Or does she revere him? Ganesh is regarded as the Lord of Obstacles, as well as Beginnings, she has obviously seen hard times, maybe some epic post-apocalyptic battle, maybe abuse at the hands of human survivors who see her as a Frankenstein monster, but she has apparently found peace/solace of some kind so she’s obviously had something to overcome, maybe her repose is her new beginning. Ganesh also resides over intellect and wisdom, again going back to the lotus and that state of higher being/ self awareness.

My work tends to be heavily symbolic, sometimes the symbolism is obscure and “alternative” in origin (I’m fascinated with the “Gnostic Bible”, for example), often times I pull different symbolism from different cultures and combine them into a strange amalgamations (Greek and Egyptian are some of my favorite to pull from).

I am fascinated with religion, although before this piece, I had never actually explored Buddhist symbolism.

Nirvana came about after a *very* long dry spell and it’s like nothing I’ve ever taken on before but then again, while I tend to maintain varying rotating works in progress (I currently have 5 different paintings sitting on my desk), they don’t really fit together as a “body of work”, per se but each and every one holds a very special place in my heart.

Each idea is like my baby, carefully nursed and nurtured into fruition, each line has an intent, a purpose, each mark, each colour applied to canvas, nothing is done without a purpose or a reason behind it.

I was once told by another instructor in college that the best and worst part of my art is my desire to educate, to question and confront. She said that talking to me, it was fascinating to learn something new, but my work was horribly confusing if you didn’t know what to look for or didn’t have the opportunity to discuss it with me.

I don’t necessarily see that as a bad thing. I like conversing, discussing my work with other people but I also don’t particularly like to hand you an interpretation on a silver platter. It’s highly unusual that I went into such detail explaining my Nirvana piece but so much thought went into it! There was so much research and notes, sketches, reference photos. Even though I have gone into great depth to explain it, I hope, and I’m sure, that someone will look at it and will see an entirely different meaning and interpretation to it and I welcome your interpretation with open arms.

Been working on this one feverishly all day. I was damn near ready to kill my brother’s dog, he jumped up on my sketchbook and ripped the paper. I spent most of the evening figuring out how to camouflage the tears his claws did. Saying I was furious was an understatement, I’ve been working on this pretty much nonstop for the last week and if I couldn’t salvage it, I don’t know what I would’ve done.

finished outlining the poppies and started working on the fan today

I spent most of my afternoon figuring out the fan, and how to make it symmetrical. I probably made it way more complicated than it had to be but I’ve been obsessing non-stop about the fan and how I was going to render it. For the most part I’m happy with what I ended up with though I still have quite a few details to add to it. 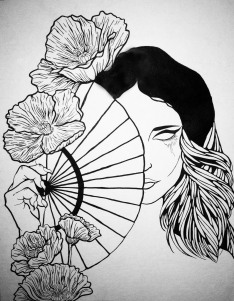 the beauty is in the details

Finally we get to the whole point of my blog! My art! I’ve written about other peoples art and my opinions on art but I haven’t shared any of mine!

Well, finally, I have something to share! One of my New Years resolutions was to draw more. I’ve been horrible about sticking to it but I’m pleased I’m at least trying to get back on track and after a several month long dry spell, I’m happy with what I’ve produced.

I’m tentatively calling the piece “Morphine”, since it’s derived from the poppy flowers which feature prominently in the painting and is a pain killer and a sedative. I wanted the girl to be beautiful and ethereal but also dangerous, like a poison.

My plan is to keep the colour scheme at a minimal, mostly black/white with colour in the poppy flowers.

She’s going to be way different from what I usually do but sometimes less is more and the beauty is in the details. I’ve been so careful and painstakingly meticulous with the details and every mark on the paper is there on purpose.

I’m still working on her and I’ve got more details I plan on adding so I won’t go to deep into “meaning” and “symbolism” since most of it won’t make sense at this stage anyways. Should you happen to find my little corner of the internet, I hope you come back to see the finished product.

It all starts behind the scenes.

Create & Decorate—the blog
Outside The Lines

This WordPress.com site is the bee's knees

A Home For Science Fiction and Fact

where past meets future